Life Cycle of an Octopus

The first thing that happens to the octopus in the life cycle of an octopus is that it hatches from an egg. The young larval octopuses spend a period of time drifting in clouds of plankton, where they feed on copepods, larval crabs and larval starfish until they are ready to sink down to the bottom of the ocean, where the cycle repeats itself. In some deeper dwelling species, such as the Dumbo Octopus, the young do not go through this period. This is a dangerous time for the larval octopuses; as they become part of the plankton cloud they are vulnerable to many plankton eaters.

A juvenile octopus grows at a rapid rate, perhaps because of its short life span. Extremely effective at turning the food it eats into body mass, a young octopus increases its weight by 5 percent each day. By the end of its life, an octopus will weigh one-third as much as all the food it has eaten. Should a larval octopus be fortunate enough to survive this difficult period, it enters into the next stage of its life: it grows into an adult octopus.

Around the age of 1 or 2 years old, the full-grown octopus is ready to mate. When octopuses reproduce, males use a specialized arm called a hectocotylus to insert spermatophores (packets of sperm) into the female's mantle cavity. The hectocotylus in benthic octopuses is usually the third right arm. Males die within a few months of mating. In some species, the female octopus can keep the sperm alive inside her for weeks until her eggs are mature. 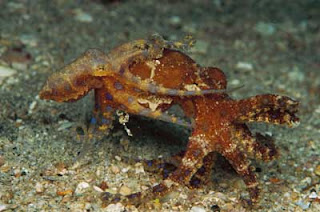 After the eggs have been fertilized, the female lays about 200,000 eggs (this figure dramatically varies between families, genera, species and also individuals). The female hangs these eggs in strings from the ceiling of her lair, or individually attaches them to the substrate depending on the species. The female cares for the eggs, guarding them against predators, and gently blowing currents of water over them so that they get enough oxygen.

The female does not eat during the two to ten month period spent taking care of the unhatched eggs (Incubation period varies according to species and water temperature). At around the time the eggs hatch, the mother dies.

Then, we are back to the beginning of the life cycle of an octopus. 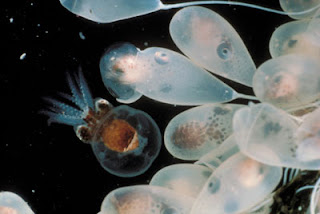 Eggs and one newborn Pacific Giant Octopus.
Posted by Death By Divas at 1:12 PM

Reading your article is such a privilege. It does inspire me, I hope that you can share more positive thoughts. Visit my site too. The link is posted below.

I really enjoyed reading your article. I found this as an informative and interesting post, so i think it is very useful and knowledgeable. I would like to thank you for the effort you have made in writing this article.

I’ve been taught that animals with the highest levels of intelligence have long lifespans. Think parrots, chimps cetaceans and us (though I’m not too sure about us), Why then, do octopuses live such short lives? And if for some reason, they don’t mate, would that give them longer lives?

Is there any layer of eggs? 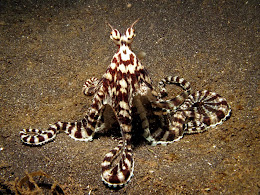 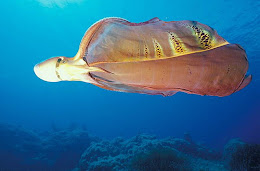 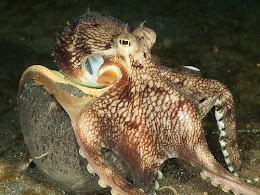